Basketball was Tim Anderson’s first passion, but baseball has become his meal ticket.

Transitioning from the hard court to the diamond, Anderson has taken off as one of the big league’s rising stars.

Last year, the swift shortstop and leadoff hitter for the Chicago White Sox led the American League in batting average (.335).

In doing so, Anderson became the White Sox’s first AL batting champion since Frank Thomas, aka “The Big Hurt,” in 1997.

There was a dramatic transition in athletic focus that made this all possible. Anderson was noted for his jump shot and crossover dribble more than for his bat and glove at Hillcrest High School in Tuscaloosa, Ala.

In 2011, he paced Hillcrest to the Alabama 6A State basketball title, drawing serious college recruiting interest.

But with all that jumping and sharp cutting, there was a problem— achy knees. While he loved basketball most, Anderson felt it wasn’t best for his long-term athletic health.

So as a Hillcrest junior and following basketball season in late March, he went out for baseball for the first time and became the squad’s leftfielder.

As a senior, he moved to shortstop and started getting the hang of the new activity.

Anderson was not drafted by an MLB team coming out of Hillcrest High. However, he earned one scholarship offer— to East Central Community College in Mississippi— and he made the most of it. As a sophomore at the two-year school, he led the National Junior College Athletic Association in hitting (.495) and was second in stolen bases (41).

In 2013, Anderson became the White Sox’s first round draft pick and the 17th overall selection.

That’s quite a dramatic rise in fortune for someone who didn’t take up baseball until his junior year in high school.

Still, there is work to be done for the man wearing No. 7 in Chicago’s black, silver and white.

A free swinger, he walks just 2.9 percent of his at bats, one of the lowest figures in the majors. His on base percentage of .357 isn’t that much higher than his batting average.

Defensively, Anderson’s 26 errors point to a problem area. He certainly doesn’t lack range. Most of his miscues afield have come on throws.

Located on Chicago’s South Side, the White Sox are in need of a strong comeback.

The AL Central Division squad is coming off a 72-89 campaign in 2019. The White Sox haven’t had a winning season in seven years and haven’t made the playoffs since 2008.

Anderson looms as the key to moving them up in the standings and ranks with the Windy City’s top attractions in any sport.

If the former basketball guard had his way, he might be suiting up for the Chicago Bulls at the United Center.

Instead, he’ll settle for trying to lead the White Sox out of the doldrums on Guaranteed Rate Field. 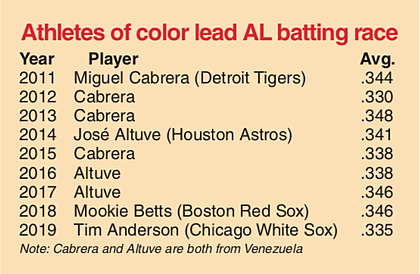