Deion Sanders now to have 2 sons at Jackson State 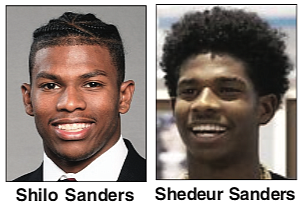 The older son, Shilo Sanders, is transferring to Jackson State from the University of South Carolina. A freshman defensive back, Shilo Sanders had 32 tackles this season for the Gamecocks.

Earlier, Shedeur Sand- ers, a senior high school quarterback, announced he would be playing for his dad at Jackson State after initially commit- ting to Florida Atlantic University.

Shilo Sanders will have at least two years of eligibility at Jackson State, a SWAC affiliate in Mississippi.

Both have played for their father, who was an assistant coach

Deion Sanders, who was named Jackson State’s head football coach in September, is a member of both the NFL Hall of Fame

and the College Football Hall of Fame.