Coach McKay putting Liberty U. on the map 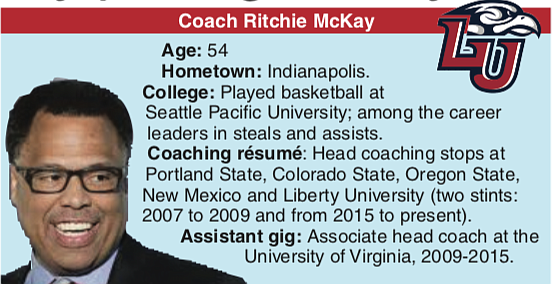 One of college basketball’s most alluring stories is unfolding just 114 miles west of Richmond in Lynchburg.

Coach McKay is the main man on the sidelines behind Liberty’s meteoric rise in college basketball.

After serving six years as an assistant under the University of Virginia’s Coach Tony Bennett, Coach McKay returned as Liberty’s head coach in 2015.

Now in his fifth season at the Atlantic Sun Conference school, Coach McKay has guided the Flames to a 19-1 record and No. 24 (out of 353 NCAA Division I schools) in Net power rankings, which determine NCAA berths.

That’s the highest Net power ranking in Virginia, followed by Virginia Tech, 33; Virginia Commonwealth University, 45; the University of Richmond, 56; and U.Va., 60, through games of Jan. 18.

Not coincidentally, Liberty University is among the nation’s defensive leaders. The Flames are holding opponents to 51.5 points per game, a paltry 36 percent shooting from the field and anemic 28 percent from beyond the arc.

There is a local connection.

Liberty went 29-7 last season, winning the Atlantic Sun title and upsetting Mississippi State University in the NCAA opener. The Flames were eliminated in the round of 32 by Virginia Tech.

Coach McKay’s glowing résumé would seem to place him on a short list of upward bound coaches. But while black athletes have dominated college basketball for decades, there is still a scarcity of black coaches in the high-dollar Power 5 conferences — the plum jobs.

There are two black coaches in the Big 12 — Mike Boynton at Oklahoma State and the University of Texas’ Shaka Smart.

When job vacancies pop up, as they always do after March Madness, Coach McKay deserves serious consideration for a big time post.