The New York Liberty has hit the refresh button.

The WNBA squad has begun a major rebuilding project with Megan Walker as the cornerstone of the plan.

The former Monacan High School and University of Connecticut sensation is one of seven rookies on Liberty’s roster. The franchise also has a new coach, Walt Hopkins.

However, the team will have to wait a while for Walker, who tested positive for the coronavirus on July 10, and for a glimpse of the Big Apple skyline.

Although asymptomatic, Walker, 21, remains in self-isolation until given the green light to join the team.

“Out of respect for her privacy, Megan will not be conducting media interviews,” the team said in a statement.

The abbreviated WNBA schedule will include just 22 games, all to be played before no crowds at the IMG Academy in Bradenton, Fla.

Once the sporting world returns to normal, the Liberty will play home games at the Barclays Center in Brooklyn.

It won’t be easy. Without Walker, the Liberty opened with an 87-71 loss to the Seattle Storm in a game telecast on ESPN last Saturday.

Few professional teams are any younger than the New York Liberty. No woman on the current roster has reached 30. 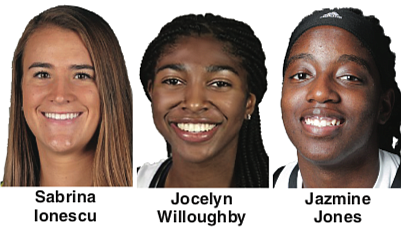 Walker is one of a whopping four Liberty first round draft choices, joining the No. 1 overall selection Sabrina Ionescu, No. 10 Jocelyn Willoughby and No. 12 Jazmine Jones.

Ionescu, of Romanian ancestry, is a 5-foot-11 guard who was the NCAA National Player of the Year a season ago for the University of Oregon.

The 6-foot Willoughby led the ACC in scoring last year for the University of Virginia.

Jones, who also is 6 feet tall, was an All-ACC selection last season at the University of Louisville.

Walker was the ninth overall selection in the WNBA draft after being a consensus All- American following her junior season at the University of Connecticut.

To create room for all the newcomers and unofficially announce a youth movement, Liberty traded seven-time WNBA All-Star Tina Charles, 31, to the Washington Mystics.

Walker rates as arguably the premier talent to ever come from the Richmond area.

As an eighth-grader at Manchester Middle School in Chesterfield County, she led the team to an undefeated season and the Chesterfield middle schools title.

At Monacan High School, she led the Chiefs to three straight state championships while accumulating 2,062 career points under Coach Larry Starr. Most recruiting services rated the daughter of Johnetta and Keith Walker as the nation’s No. 1 prospect.

The 6-foot-1 guard-forward hardly missed a beat transi- tioning to perennial NCAA juggernaut UConn. As a junior, she averaged 20 points while being named American Athletic Confer- ence Player of the Year and to numerous All-American lists.

After tallying 1,251 points in just three college seasons, Walker passed on her senior season at UConn to enter the WNBA draft.

Walker may be the best player from the Richmond area since Jessie Hicks came out of Thomas Jefferson High School in the late 1980s.

The 6-foot-4 Hicks, who once scored 50 points in a high school game, became a two-time All-ACC pick for the University of Maryland, where she played from 1989 to 1993.

Hicks went on to play in the WNBA for the Utah Starzz, the Orlando Miracle, the Connecticut Sun and the San Antonio Stars.