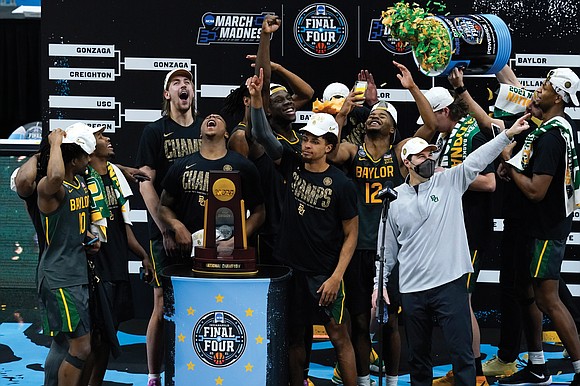 It was an “un game,” with the Baylor Bears scoring an unexpectedly easy 86-70 win over Gonzaga with an unforgettable show Monday night in the men’s NCAA Tournament final.

Under 18th-year coach Scott Drew, the Big- 12 school from Waco, Texas, dominated from start to finish at the tournament in Indianapolis to sever the Zags’ winning streak at 31.

“I thought we were on a mission to make the most of it,” Coach Drew said.

Baylor started the game on a 9-0 run and never let up on the gas, leading by as many as 20 points.

“They punched us in the mouth from the get go,” said Gonzaga All-American Corey Kispert.

Gonzaga was seeking to become the first undefeated champion since Indiana in 1976.

Baylor, playing in the Final Four for the first time since 1948, became only the second team from the state of Texas to win the title, following Texas Western (now University of Texas-El Paso) in 1966.

The more physical Bears outmuscled the Zags on the glass, winning the rebounding 38-22.

“The start of the game was tremendous,” said Butler, a 6-foot-3 guard from Reserve, La. “It was electrifying, especially in that kind of moment. Everyone stepped up. Everyone was clicking on all cylinders. That’s what it takes to win.”

The two seniors in Coach Drew’s lineup were guard MaCio Teague, who had 19 points, and burly Mark Vital, who grabbed 11 rebounds.

Seniors will have the option to return for another season under the NCAA’s pandemic guidelines.

It was Suggs who banked in the 35-foot shot at the buzzer to defeat UCLA in the overtime semifinals.

Baylor was never seriously tested in Indiana. Of its six NCAA victories, all were by double-digit margins except for an 81-72 win over the University of Arkansas in the Elite Eight.

The Bears won their last 11 straight games overall. Their last loss was Feb. 27 at Kansas. Baylor became the first NCAA champ since the University of Virginia won the final in 2019. There was no tournament in 2020 due to the pandemic. This year’s entire event was held in a “bubble” in Indiana.

It’s not like the Bears were immune to the ramifications of the dreaded virus. Games against Texas, West Virginia, Texas Christian and Oklahoma were canceled earlier in the year due to positive COVID-19 tests.

The Bears are no one-year wonder. The team was 26-4 a year ago and would have been a favorite to win it all in the tournament that never was.

Unfazed by the disappointment, the Bears viewed this season as a chance to take care of unfinished business, and they did. 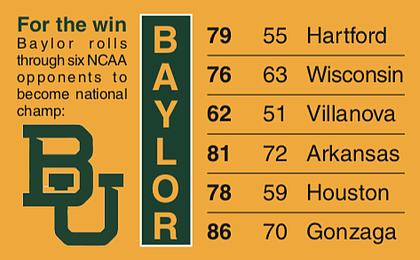