Derrick Henry has joined one of the NFL’s most prestigious fraternities—the 2,000 yard club.

The bruising Tennessee Titans tailback has become just the eighth ball carrier to rush for more than 2,000 yards in a season.

Henry finished this season with 2,027 yards after rumbling for 250 yards in Tennessee’s closing 41-38 victory last Sun- day over the Houston Texans. The former Heisman Trophy winner raced for 1,540 yards in 2019.

In fairness to the “old timers” such as Jim Brown, Leroy Kelly and Floyd Little, the NFL played a 12-game schedule until 1960 and a 14-game slate until 1978. 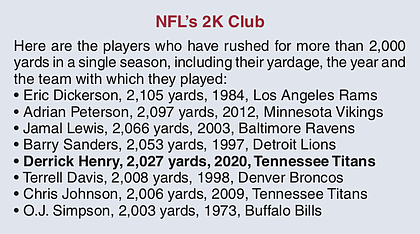