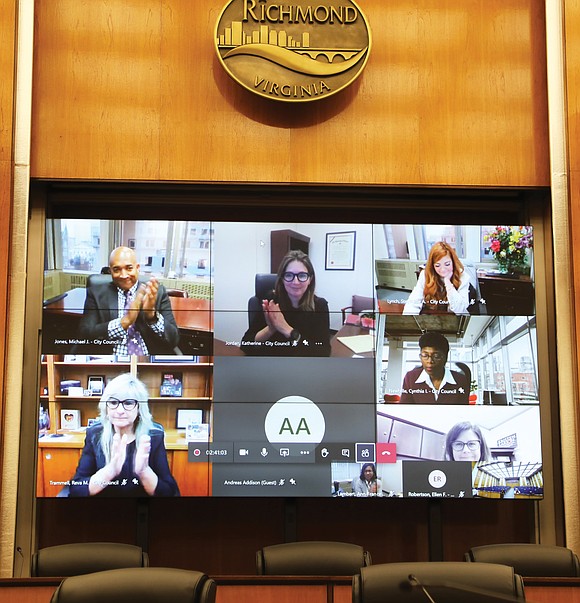 Richmond City Council members applaud during the swearing-in ceremony Monday at City Hall. They were sworn in one member at a time in person in the City Council Chambers and then met virtually as a group from their City Hall offices. Photo by Regina H. Boone

Dr. Cynthia I. Newbille, now starting her 12th year representing the city’s 7th District in the East End, promised to put more effort into ensuring members work together as she won re-election to a second term as council president.

Dr. Newbille noted the city is facing multiple challenges, including a disruptive pandemic that “will require all of us learning, working more collaboratively to address these challenges and to facilitate the kind of recovery and rebound our city needs to create an even better future for all.”

Councilwoman Ellen F. Robertson, who just completed her 17th year representing the 6th District that includes parts of the city on both sides of James River, was the unanimous choice for vice president, a post she previously held from 2009 to 2015.

The tandem of leadership reflects that seven women now hold seats on the nine-member City Council. That’s the most ever and includes the two new members, who cast their first recorded votes in the election of officers after being sworn in.

On the committee front, Councilman Andreas D. Addison, 1st District, took Ms. Robertson’s place as chair of the Land Use, Housing and Transportation Committee and also became the council’s representative on the city Planning Commission.