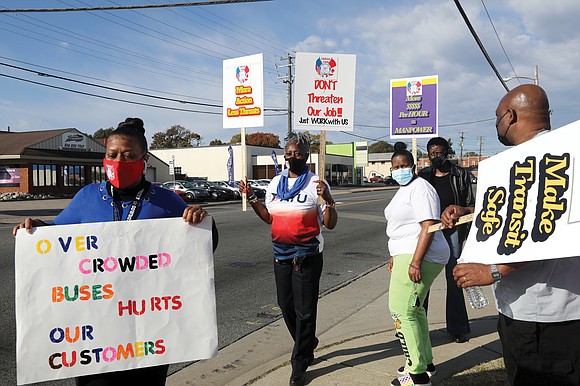 GRTC bus drivers, retired drivers and members of Amalgamated Transit Union Local 1220 picket Nov. 10 outside the transit company’s headquarters on Belt Boulevard in South Side to call public attention to safety issues and other concerns. Photo by Regina H. Boone

Active drivers and retired bus operators hold up signs to passing vehicles Nov. 10 as they conduct informational picketing in front of GRTC’s headquarters at 301 E. Belt Blvd. in South Side.

Safety and security concerns, along with issues about pay and working conditions, are fueling this effort to reach out to the public, according to Maurice Carter, president of the Amalgamated Transit Union Local 1220, which represents GRTC bus drivers, mechanics and other employees.

The picketing began Nov. 5 in response to a finding that a driver who was savagely kicked and beaten by a passenger in mid-October had been wrongly disciplined by the company. GRTC’s chief executive officer acknowledged that in issuing a public apology for the company’s action and rescinding it.

The safety concerns then increased after a GRTC passenger shot and killed another during a dispute on a bus near South Side Plaza on Nov. 9.

On behalf of his union members, Mr. Carter has renewed the local’s call for GRTC to either hire off-duty law enforcement officers to ride on buses or hire its own sworn officers, based on internal company findings that verbal and physical assaults against drivers are on the rise. More than 35 incidents have been reported this year.

Carrie Rose Pace, GRTC spokeswoman, said that GRTC supervisors and members of its training and safety staff take planned and random rides to provide support. However, Ms. Pace said that GRTC’s requests for the Richmond Police Department to provide off-duty personnel to ride buses have been rejected repeatedly.

She said GRTC would “continue to explore supplementary police support by contract,” although action has yet to be taken to implement such a contract.

Among other issues, Mr. Carter said members of the union are concerned about GRTC’s plan to outsource work to Uber and other on-demand ride services due to a shortage of drivers.

GRTC’s Board of Directors on Tuesday authorized that initia- tive to begin effective Sunday, Dec. 19. The experiment would provide one prepaid, on-demand ride a day to passengers during certain hours, 5 to 6 a.m. and 11 p.m. to 2 a.m. Mondays through Fridays, Ms. Pace said.

According to Ms. Pace, this will be the first of several experimental programs using small vehicles and on-demand services to expand transit service in the region.

Ms. Pace said GRTC is aware of the issue. She said that “details are still being worked out” with Uber and other potential on-demand service providers “to ensure we are compliant with FTA rules,” including those involving random drug testing.