VCU Rams ready to take on Syracuse in the Bahamas 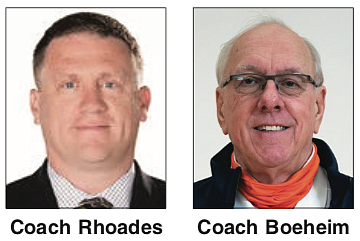 Virginia Commonwealth University is preparing to face not one but three Boeheims on Wednesday, Nov. 24, in the Bahamas.

The Rams will take on Syracuse University at 5 p.m. in the Battle 4 Atlantis. Syracuse is coached by 77-year-old Jim Boeheim (career record 982-409).

There is some history between the schools.

On March 18, 1984, a Syracuse squad led by Pearl Washington defeated the VCU Rams 78-63 in the second round of the NCAA playoffs at The Meadowlands in New Jersey.

By contrast, Wednesday’s game is a very early season test. Still, it will draw national ESPN coverage and will weigh heavily on NCAA Tournament résumés.

The VCU-Syracuse winner/loser will play Thursday, Nov. 25, against the winner/loser of the game between defending NCAA champion Baylor University and Arizona State University. The Rams’ second game will be at either 5 or 7:30 p.m. Thanksgiving Day.

VCU, which is 2-2 following a 56-54 home loss to the University of Tennessee-Chattanooga on Nov. 20, has wins over Saint Peter’s University and Vanderbilt University and a loss to Wagner College on Nov. 13.

Syracuse is 2-1 and coming off a humbling 100-85 Carrier Dome loss on Nov. 20 to Colgate University as the visiting Red Raiders hit 18 three-pointers. Colgate had lost the previous 54 matchups against Syracuse.

Despite a national reputation and winning the 2003 NCAAchampionship, Syracuse has been fairly ordinary since joining the Atlantic Coast Conference. The Orange is 79-62 in ACC play under Coach Boeheim. The New Yorkers did catch a spark at the end of last season, advancing to the NCAA Sweet 16. The Rams made last season’s NCAA field but bowed out due to positive COVID-19 tests.

In the Bahamas, VCU will have something of a “Island Advantage” with 6-foot-9 junior Hason Ward from Barbados. Ward hasn’t scored much but has blocked 14 shots.

While VCU is struggling on offense — just 53 points per game — it would appear Syracuse, famous for Coach Boeheim’s trademark 2-3 zone, has major defensive issues.

Following action in the Bahamas, the Rams will return home to entertain the Campbell University Fighting Camels on Saturday, Dec. 4. 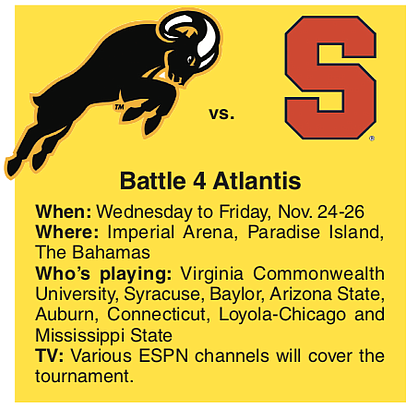