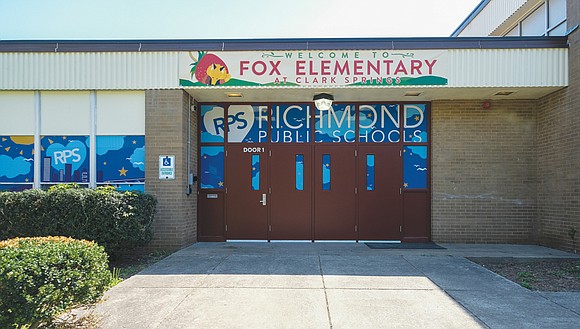 In a 5-0 vote on Monday night, the Richmond School Board approved an amended recommendation for the students to move Monday, May 9, into the school at 1101 Dance St. in Randolph from their temporarily quarters at First Baptist Church in The Fan.

This will be the second relocation for Fox students since their 111-year-old school building on Hanover Avenue in The Fan was ravaged by fire on Feb. 11. Following the fire, students had virtual instruction before resuming in-person learning March 21 at the church.

Clark Springs is expected to remain the learning space for Fox students until the fire-damaged school is rebuilt. No estimate has been given on when that project will start or be completed.

To accommodate the move to Clark Springs, Superintendent Jason Kamras proposed that Fox not hold classes on Thursday and Friday, April 28 and 29 or on Monday, May 2. He told the board that would give teachers and staff three days to move into their new classrooms and offices at Clark Springs.

But the board voted for Fox classes to be canceled all of next week, May 2 through 6, giving everyone a chance to

make the needed adjustments. The entire school system will be closed Tuesday, May 3, in observance of Eid al-Fitr, the Islamic holiday marking the end of Ramadan.

A recent RPS survey found that nearly 70 percent of Fox teachers wanted to move to Clark Springs Elementary as soon as possible.

Mr. Kamras said a professional moving company has been secured so teachers won’t have to move their classrooms on their own.

Additionally, every Fox teacher will get a $500 Amazon gift card to help them with supplies.

“The time at the church has been extremely stressful,” a speaker told the board during Monday’s meeting. “The kids fight, the teachers yell and then they retreat into the hallway where they also cry.”

Mr. Kamras thanked First Baptist Church for being a “flexible, generous and loving host” to the Fox Elementary family.