3 people of color in Youngkin’s cabinet 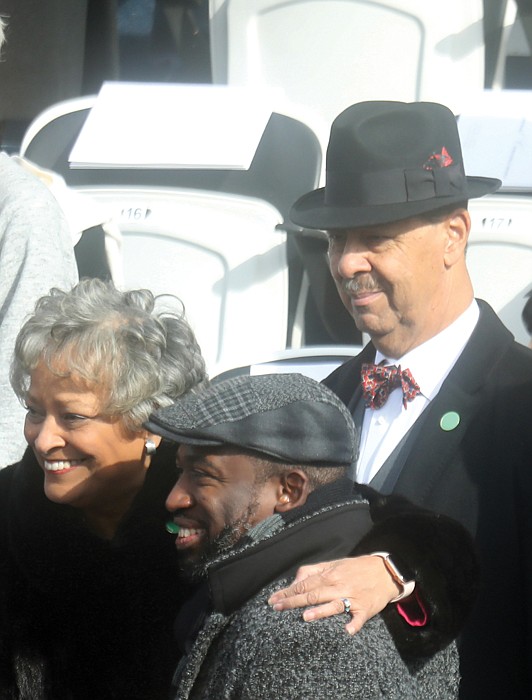 Gov. Glenn A. Youngkin began his new job this week promising bold steps in his “movement” to reverse the political agenda of the last decade and to put the state’s government back on conservative wheels.

He also has named three Black people to his 13-person cabinet. All the nominees must be approved by the General Assembly.

Kay Coles James, a graduate of Hampton University, was named secretary of the commonwealth.

A devout Republican who served as state secretary of health and human resources under former GOP Gov. George Allen, Ms. James was appointed by former President George W. Bush to head the U.S. Office of Personnel Management from 2001 to 2005.

Ms. James, who last year organized a group aimed at energizing Black people to get COVID-19 vaccinations, stepped down at the end of December as president of the Heritage Foundation, a well-known conservative think tank in Washington, D.C. She was a member of Gov. Youngkin’s transition team.

Ms. James is expected to give Gov. Youngkin an escort through the halls of Washington, where she worked with law and policy makers for more than a decade.

A native of Pensacola, Fla., Maj. Gen. Crenshaw is president of Claxton Logistics Services based in Stafford.

He earned a bachelor’s degree from Southern University in Louisiana and master’s degrees from Webster University in St. Louis and the Eisenhower School for National Security and Resource Strategy.

Ms. Sailor served as Ms. James’ chief of staff at the Heri- tage Foundation. She has spent 20 years working on Capitol Hill and in the White House, and previously held positions with John Deere, NASCAR, Wells Fargo, Proctor and Gamble and BET.

She attended Spelman College and graduated from Central State University in Ohio. Ms. Sailor also has a master’s in broadcast journalism and public affairs from American University and a law degree from the University of Memphis.

One of Gov. Youngkin’s appointees, Andrew Wheeler, as state secretary of natural resources has come under fire from environmental groups because of his views and positions down-playing the urgent threats of climate change.

An experienced former U.S. Senate staff attorney on environmental issues, Mr. Wheeler has been a lobbyist for the coal industry. He served as former President Trump’s administrator of the U.S. Environmental Protection Agency. More than 150 former employees of the federal agency sent a letter last week to the state Senate urging them to reject his nomination.

As state secretary, he would oversee policies on conservation, climate change, Chesapeake Bay restoration and several agencies, including the state Department of Environmental Quality, which handles environmental permits, monitoring and inspections.

Gov. Youngkin has been a strong opponent of rigid environmental protection rules.

Other cabinet nominees include:

Gov. Youngkin also named attorney Richard Cullen, a former Virginia attorney general and former chairman of McGuireWoods law firm, as his chief counsel. A fixture in Virginia politics who has worked with political leaders for several decades, Mr. Cullen has worked with such clients as former Vice President Mike Pence and Elin Nordegren, the ex-wife of golf superstar Tiger Woods.