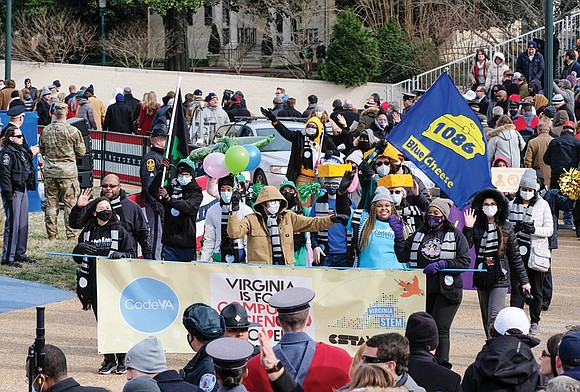 Students from Richmond’s Martin Luther King Jr. Middle School STEM program march in the inaugural parade last Saturday in Capitol Square. Democrats have accused Gov. Glenn A. youngkin of ignoring science and state law with his executive order to lift mask mandates in public schools that were put in place to protect students, teachers and staff from COVID-19. Photo by Sandra Sellars

Just days after his inauguration, Gov. Glenn A. Youngkin is getting major pushback from legislators, parents and public school systems around the Commonwealth – including the Richmond area – over his executive order to end school mask mandates.

Gov. Youngkin issued nine executive orders just hours after his swearing in last Saturday as Virginia’s 74th governor, including one ending the statewide mandate that students, teachers, staff and visitors in all K-12 schools wear masks to protect against COVID-19. The order is effective Monday, Jan. 24.

In the order, Gov. Youngkin called the mandates “ineffective and impractical.” He also said in remarks made earlier this week that he planned to use all resources possible, including withholding state money from public schools, to ensure that the decision to wear masks is left to the parents of public school students.

In a news conference on Tuesday, Democratic lawmakers said Gov. Youngkin has no authority to lift the mask mandate. They cited a measure, Senate Bill 1303, that was passed with bipartisan support and signed into law last year that directs local school boards to adopt in-person schooling policies that reduce the transmission of COVID-19 based on the guidance and recommendations of the federal Centers for Disease Control and Prevention.

The CDC recommends universal indoor masking for students age 2 and older, teachers, staff and visitors in schools regardless of their vaccination status or the area’s COVID-19 transmission rate.

In a clear and succinct text Monday to the Richmond Free Press, Richmond Schools Superintendent Jason Kamras stated that RPS “will maintain its 100 percent mask mandate for students, staff and visitors. The science is clear: masks work.”

The Richmond School Board backed up his message with an 8-1 vote at Tuesday night’s meeting to uphold the school system’s mandate for anyone age 2 and older to wear a mask indoors in school.

The board’s resolution also pointed out the existing Virginia law giving powers to local school boards to make their own decisions about certain policies.

Board member Jonathan M. Young, 4th District, cast the lone dissenting vote. He offered an amendment, which was voted down, that echoed Gov. Youngkin’s execu- tive order giving parents the opportunity to exempt their child from any mask requirement when attending RPS.

Mr. Kamras said keeping the mask mandate is the right thing to do to ensure the health and safety of students, teachers and staff.

Henrico County Public Schools officials also issued a statement Monday noting that the county schools will “continue to follow the recommendations of health experts and require all students, staff and visitors to wear face masks at schools and facilities except during mealtime, when outdoors — with appropriate physical distancing — or when participating in designated athletic activities.”

Officials added that while the Henrico School Board and schools administration respects that parents make decisions for their families, school division leaders must make decisions for the collective safety of nearly 49,000 students and 10,000 employees and fulfill HCPS’ responsibility to provide in-person instruction.

Chesterfield County Public Schools officials indicated they are reviewing Gov. Youngkin’s executive order before making any decisions. Officials said they would communicate with staff and families by Jan. 23 with any updates.

At the same time, the Chesterfield County Branch NAACP’s Legal Redress Committee announced that the civil rights organization is opposed to any attempt by the new administration to circumvent existing Virginia law and masking recommendations by the CDC and other public health authorities when it comes to the health and safety of county students.

According to the Virginia Demarcates, school divisions across Virginia are rejecting Glenn Youngkin’s dangerous anti-science executive action and keeping mask requirements in schools to ensure the health and safety of K-12 students.

Several news reports pointed out that Gov. Youngkin’s son, Thomas, a junior at Georgetown Preparatory School in North Bethesda, Md., has more protection at his school than the governor is allowing for

public school students in Virginia. Accord- ing to reports, the prep school requires all persons, regardless of vaccination status, to wear masks while indoors on campus, except while eating meals or while residents are in their own dorm room.

During a news conference on Tuesday, House and Senate Democrats criticized Gov. Youngkin’s threat to use all the tools at his disposal to ensure his executive order is followed. Republican Lt. Gov. Winsome Earle-Sears suggested in an interview with FOX News that the tools include defunding schools that defy the governor’s executive order.

Democrats decried the threat to withhold state funding, saying the governor and his administration are playing politics with the health of the state’s public schoolchildren.

“As a parent of two children in Richmond Public Schools, I appreciate the school division’s efforts to keep our children and school staff safe during the latest and most contagious COVID-19 wave,” Richmond Sen. Jennifer McClellan wrote in an email to the Free Press.

She said she applauds other school divisions that have made it clear they will continue to follow CDC masking guidelines as required by law.