The Obamas’ official portraits unveiled at the White House 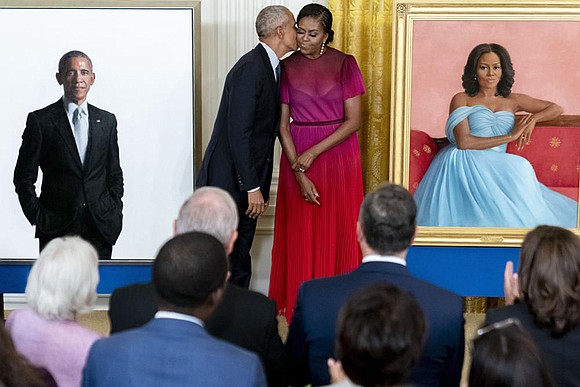 Former President Obama and his wife, former First Lady Michelle Obama, are shown at the unveiling of their official White House portraits during a ceremony Sept. 7 in the East Room of the White House. Photo by Andrew Harnik/The Associated Press

WASHINGTON - Former President Obama and his wife, Michelle, returned to the White House on Sept. 7, for the unveiling of their official portraits with a modern vibe in an event that set humor and nostalgia over his presidency against the current harsh political talk about the survival of democracy.

While her husband cracked a few jokes about his gray hair, big ears and clothes in his portrait, Mrs. Obama, a descendant of slaves, said the occasion for her was more about the promise of America for people like herself.

President Biden, who was Mr. Obama’s vice president, praised his former boss’ leadership on health care, the economy and immigration and said nothing could have prepared him any better for being president than serving with Mr. Obama for those eight years.

“It was always about doing what was right,” he said.

The portrait of Mr. Obama, America’s 44th and first Black president, doesn’t look like any of his predecessors, nor does Michelle Obama’s look like any of the women who filled the role before her.

President Obama stands expressionless against a white background, wearing a black suit and gray tie in the portrait by Robert McCurdy that looks more like a large photograph than an oil-on-canvas portrait. The former first lady, her lips pursed, is seated on a sofa in the Red Room in a strapless, light blue dress. She chose artist Sharon Sprung for her portrait.

Scores of former members of President Obama’s administration were on hand for the big reveal.

President Obama noted that some of them in the East Room audience had started families in the intervening years and feigned disappointment “that I haven’t heard of anyone naming a kid Barack or Michelle.”

He thanked Mr. McCurdy for his work, joking that the artist, who is known for his paintings of public figures from Nelson Mandela to the Dalai Lama, had ignored his pleas for fewer gray hairs and smaller ears. “He also talked me out of wearing a tan suit, by the way,” President Obama quipped, referring to a widely panned appearance as president in the unflattering suit.

President Obama went on to say his wife was the “best thing about living in the White House,” and he thanked Ms. Sprung for “capturing everything I love about Michelle, her grace, her intelligence — and the fact that she’s fine.”

Michelle Obama, when it was her turn, laughingly opened by saying she had to thank her husband for “such spicy remarks.” To which he retorted, by way of explanation, “I’m not running again.”

Then the former first lady turned serious, drawing a connection between unveiling the portraits and America’s promise for people with backgrounds like her own, a daughter of working-class parents from the South Side of Chicago.

Mrs. Obama said the portraits are a “reminder that there’s a place for everyone in this country.”

Tradition holds that the sitting president invites his immediate predecessor back to the White House to unveil his portrait, but Donald Trump broke with that custom and did not host President Obama. So, President Biden scheduled a ceremony for his former boss.