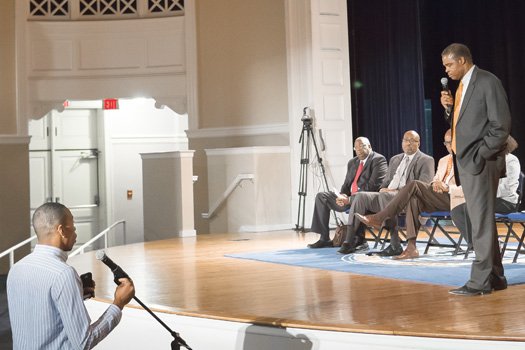 He assured them his administration is doing all it can to plug a $19.6 million shortfall in revenue without sharper cuts to staff and student services.

“All the universities that are having challenging times address the budget in a number of ways. We’ve prioritized people and academics,” he said last Thursday. “We will work through this challenge together.”

The leader of the 132-year-old, historically black institution is facing perhaps his toughest challenge since taking the helm of the university four years ago.

The circle of concern is growing. In the coming days, Dr. Miller may be answering more questions as thousands of alumni flock to the campus for homecoming and as the board of visitors gathers for a special session.

Since the start of the school year in August, VSU has closed four dormitories, cut cafeteria services at its sparkling Gateway Hall, eliminated classes and curbed evening programs.

The administration’s moves were designed to close a roughly $19.6 million budget gap for the 2014-15 year. The shortfall comprises $12.1 million in auxiliary services such as dormitories and food services, $5.8 million in tuitions and fees and a $1.56 million reduction in state support, according to an internal VSU budget document.

The losses in revenue are largely due to the Miller administration overestimating the number of student who would attend the university this year and live in its dorms and apartments. Only 4,995 undergraduate and graduate students enrolled, or 752 fewer than in 2013 and 505 less than the budget’s projected 5,500 students.

The university also overestimated the number of students who would live in its residential units by more than 900 students.

Students have been stunned by the cuts in services. They mounted a protest rally two weeks ago calling for Dr. Miller’s resignation and that of members of his leadership team. They questioned why VSU’s administration had not foreseen the shortfall and were critical of what they said was a lack of communication about the financial problems and the impact on them.