NSU wins bragging rights after Battle of the Bay 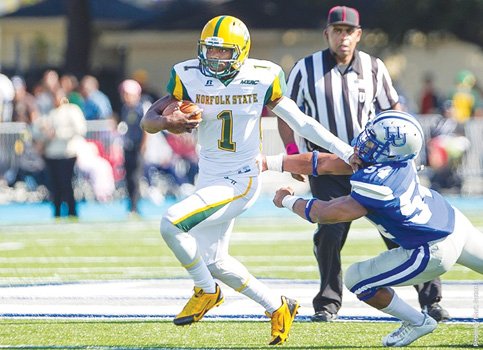 Terrance Ervin is among the most successful quarterbacks in state high school football history.

Now it seems he has carried that winning spirit to the college campus.

As a Norfolk State University freshman, Ervin passed for 335 yards and three touchdowns, spurring the Spartans to a 21-13 victory over Hampton University in the annual Battle of the Bay.

The victory gives NSU a 26-25-1 edge in the decades-long rivalry between schools separated by just 14.8 miles on opposite sides of the Chesapeake Bay.

Hampton had won four of the previous six matches before Oct. 18.

Before a crowd of 16,223 at Hampton’s Armstrong Stadium, Ervin connected on 22 of 31 passes. He connected with Keith Johnson for a 29-yard touchdown in the first period.

Wearing jersey No. 1, Ervin found his favorite target, Isaac White, for a 12-yard score in the third period and White again for a put-away, 30-yarder in the fourth period.

White finished with 10 catches for 150 yards.

The win lifts NSU to 3-5 overall and 3-1 in the MEAC. The Spartans have until Nov. 1 to celebrate, when they travel to Florida A&M University in Tallahassee.

With its next game at Delaware State on Oct. 25, Hampton falls to 1-6, 0-3 under first-year coach Connell Maynor.

The 6-foot-3, 210-pound Ervin arrived at NSU with impeccable credentials. At L.C. Bird High School in Chester, he led the Skyhawks to back-to-back state crowns.

Ervin’s two-year record at Bird, after transferring from Henrico High School, was 29-0. In two seasons, he threw for 3,666 yards and 50 touchdowns.

Heavily recruited, he first committed to Liberty University before changing his mind and joining 10th-year coach Pete Adrian at NSU.

White, a 6-foot-3 junior from Portsmouth’s I.C. Norcom High School, also has some Richmond-area “connections” of sorts. He’s another with lots of winning experience in his background.

As a Norcom sophomore and junior, White helped the Greyhounds to state basketball titles in 2010 and 2011 in events held at Virginia Commonwealth University’s Siegel Center in Richmond.