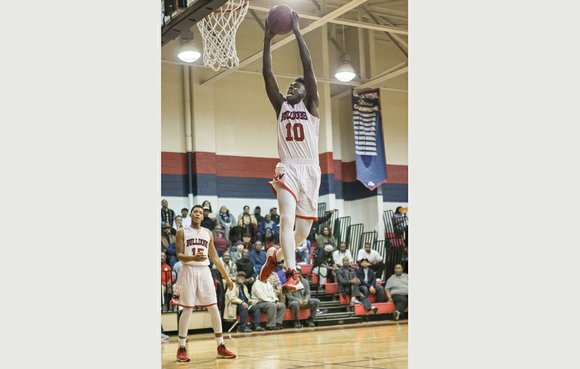 Then there’s a quartet of rookies, plugging holes in the lineup left by the loss of four starters from last year’s 26-6 state champions.

And then … drum roll please … there’s a much-anticipated cavalry charge. More on that later.

If all three elements click, the Bulldogs just may stage a gallant, come-from-behind finishing kick to contend for postseason bows.

“I feel good despite our record,” said George Wythe Coach Willard Coker. “We’ve had to break in a bunch of new kids into a tough system. In three of those losses, Maliek didn’t play (due to a thigh bruise) and they were still winnable games.”

Wythe improved to 10-7 on Monday night with a 79-58 victory over Cosby High School.

In what has been a winter of navigating choppy waters, it was the Bulldogs’ fourth straight win.

“We needed time playing together to get some chemistry,” said White. “If we play as a team, we can make another run” at the state championship.

All are talented and each has enjoyed his moments. Consistency, understandably, has been the issue.

Long limbed and lithe, Shabazz-Allah is averaging nearly a double-double (points and rebounds) and appears to be the Bulldogs’ star in waiting, at least on the current roster.

“He can be the best big man in the area,” said Coach Coker. “Right now, he’s finding his way.”

Known to friends as “KB,” he is the son of 6-foot-6 Trevonne Eggleston, the 1992 Dominion District football defensive player of the year at Huguenot High School.

“I’m just trying to play hard and hit the boards,” Shabazz-Allah said. “Coach wants me to be a scorer, too. I’m trying to be.”

As a sophomore, Shabazz-Allah played on Wythe’s junior varsity team. He watched the state games, including Wythe’s 80-60 romp of Spotswood High in the final, tucking his long legs into a Siegel Center seat.

“I just watched and cheered the team on,” he recalled.

Now news of the “cavalry.”

Coach Coker is hopeful of increased firepower later this month for the challenging Conference 26 tournament at the Arthur Ashe Jr. Athletic Center. The Bulldogs’ roster will expand with some spring semester add-ons.

“I really don’t want to name any names until they’re out on the floor,” said Coach Coker. “You’ve got to understand.”

At least one is an athlete in Shabazz-Allah’s height range, who transferred from another city school.

The “cavalry” cooled its heals for eligibility as the end of the fall semester was moved from Feb. 2 to Feb. 9 because of time lost to weather.

But with White, along with an improving cast of newcomers, and the cavalry’s trumpeted arrival, the Bulldogs could be at their best when it counts the most.