City Councilwoman Kim B. Gray, 2nd District, hit the pause button on her proposal to rename the Boulevard for Arthur Ashe to honor the late Richmond-born tennis great and renowned humanitarian. 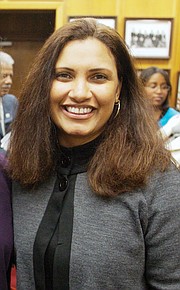 Saying she wanted to “provide more time for dialogue,” Ms. Gray secured a 60-day delay until Tuesday, Dec. 18, before the plan is to be considered by the Richmond City Council’s Land Use, Housing and Transportation Committee.

The proposal must clear the committee to get a hearing from the nine-member council.

Also at the committee’s Tuesday meeting, the three members again tabled action on a proposal to kill bike lanes planned for Brook Road. It now is to be considered at the Nov. 20 meeting.

The bike lane delay also was at the request of Ms. Gray, a committee member.

The committee also put a 30-day hold on a proposal from Mayor Levar M. Stoney’s administration to authorize electric scooter rental companies to operate in Richmond.

The committee put the scooter rental measure on hold to allow time to review amendments the administration plans to introduce at the City Council meeting on Tuesday, Nov. 13, which has been moved from its normal Monday because of the Veterans Day holiday.

The idea of renaming the Boulevard for Mr. Ashe initially drew cheers from the public and seemed to be on a fast track for approval.

But Ms. Gray acknowledged that the proposal has been hit by a backlash from many of the mostly white residents and business owners on the street who want to preserve the Boulevard name.

The criticism, she said, has included outlandish claims, such as assertions that property deeds would need to be changed if the street name is changed. She said that has been debunked by the Circuit Court Clerk’s Office.

Ms. Gray also noted accusations that she introduced the proposal without first consulting a Boulevard civic group. That group, she said, has been defunct for years.

However, Ms. Gray is concerned the blowback is eroding support from her council colleagues.

City Council rejected similar renaming plans in 1993 just after Mr. Ashe died, and again in 2003, on the 10th anniversary of Mr. Ashe’s death.

Mr. Ashe was the first and only African-American male tennis player to win three Grand Slam titles — the Australian Open, Wimbledon and the U.S. Open.

Ms. Gray said three council members told her they are prepared to vote against the proposal.

She said the delay would give her time to “shore up support” among residents and council members.

Those include Ms. Robertson’s proposal requiring that 15 percent of housing units carry lower or affordable rents in any residential development in which the city provides land or any investment of taxpayer funds.

The committee also referred legislation to the council that would require the administration to monitor and ensure that buyers of tax delinquent properties carry out development agreements with the city, including completing renovations within a stipulated time period.

Other non-controversial items that cleared the committee include the administration’s plan to use $950,000 in state highway funds to improve a stretch of Jefferson Davis Highway and of Semmes Avenue in South Side.

The committee also endorsed a plan to relocate a Verizon utility line to allow the city to open to public use an athletic field at Hickory Hill Community Center on East Belt Boulevard in South Side.