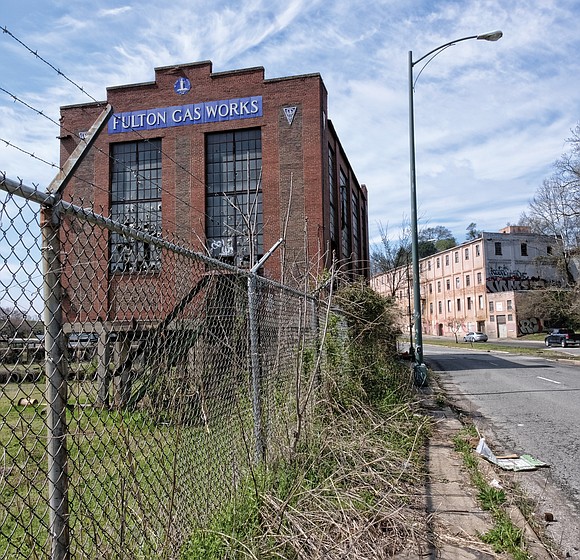 A four-year-old plan to turn the now vacant Fulton Gas Works in the East End into a modern hub of the city’s gas utility is quietly gaining momentum, although a separate project by Stone Brewing to create a restaurant to complement the company’s beer factory appears to have stalled.

For a century, coal gas was created and used to power homes, businesses and streetlights from Fulton Gas Works, located at 3301 Williamsburg Ave. An environmental assessment of the site is nearing completion at a cost of $560,000, according to the city Department of Public Utilities.

By early next year, contractors are expected to be hired and working on the estimated 14-acre property, demolishing old structures on the site and removing the heavy metals and fuel contamination in the soil. Projected cost: $800,000 for demolition and $3 million to eliminate contamination.

“We expect work to begin in early 2020,” according to Angela Fountain, spokesperson for city Public Utilities.

The department had hoped to begin work in 2018, but the assessment period to meet state and federal environmental requirements took longer than anticipated. The department now expects to get a green light to work on the property that also fronts the 3100 block of East Main Street.

Ms. Fountain noted that the assessment of environmental contamination on the Main Street side of the property is the part that is closest to completion.

Department officials envision redeveloping part of the property as the central location for natural gas sales and marketing and to provide space for the gas utility’s construction, maintenance and engineering sections.

“The project also will seek to improve the area’s visual appeal” because it is close to the riverfront, according to a 2017 department release. The department also hopes to offer part of the property for private development in order to generate tax revenue.

Meanwhile, Stone Brewing remains mum on the future development of a restaurant or bistro at the site of the historic, but vacant Intermediate Terminal, once a storage space for sugar and tobacco leaf imports that is located a few blocks east of Fulton Gas Works and a stone’s throw from the California-based company’s brewing operation.

The restaurant was billed as a centerpiece of the Stone operation and was expected to employ nearly 200 people, though mostly in part-time positions, and its riverfront operation was seen as a potential huge boost for the East End.

The company proposed tearing down the concrete terminal building, but pulled back last year before the issue came before Richmond City Council. So far, Stone Brewing has not publicly advanced another proposal for the restaurant.

Under an agreement with the city’s Economic Development Authority, Stone Brewing is required to begin development of the restaurant this year, no later than Dec. 31, or it would need to repay a portion of the incentive money the state and city provided if it fails to fully meet projections for employment and investment.

The company just shut down its Berlin bistro, which failed to generate the kind of response and patronage that the company’s restaurant operations in California have received.

The city Department of Economic Development previously reported to City Council that Stone Brewing is meeting beer production targets and moving closer to meeting a requirement of employing at least 90 full-time employees at its brewery at an average annual salary of $57,024.