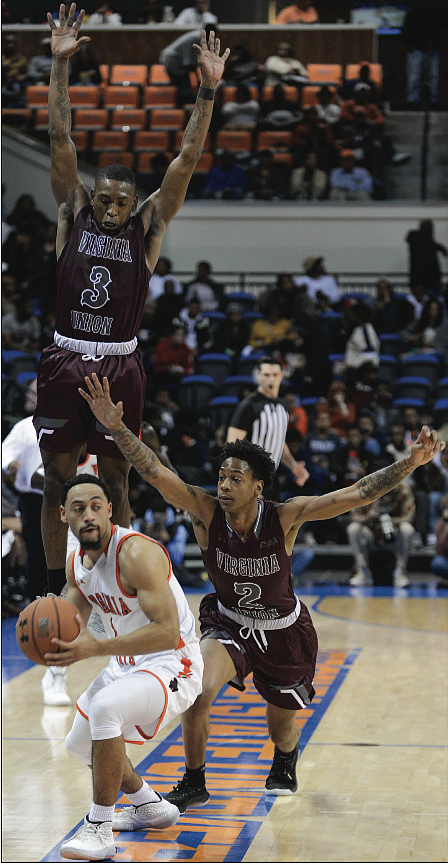 If the Virginia Union University Panthers were homesick, it didn’t show.

In the midst of an epic road trip, the Panthers looked comfortable and confident in routing host Virginia State University 82-62 in the 25th Annual Freedom Classic last Saturday at the VSU Multi-Purpose Center.

Terrell Leach scored 34 points and Tyriek Railey 22 points as the Panthers slammed the brakes on an agonizing four-game skid — all nail-biters away from Richmond.

VUU had lost its previous four games by a combined five points. “We’re not afraid of anyone in the CIAA,” said VUU Coach Jay Butler. “In this league, we can beat anyone — and anyone can beat us. Tonight, I told the players to just have some fun and that the bad luck was going to change.”

Averaging 22 points per game, Leach is in a tit-for-tat race with Livingstone College’s Ray Roger for the CIAA lead.

VUU’s all-time record for season scoring average was set by Mike Davis in 1966 with a 36.3 margin that led the NCAA Division II. Davis went on to be drafted in the first round by the NBA’s Baltimore Bullets and made the NBA All-Rookie team.

Panther A.J. English, who became a second round NBA draft selection, led the nation in 1990 with a 31-point average.

While Leach has been a constant for Coach Butler’s squad, Railey is just coming into his own. The Jacksonville, Fla., native comes to VUU after two seasons at Little Priest Tribal College, a Native American school in Nebraska.

The 6-foot guard averages nine points per game and is second on the team behind Leach for 3-pointers. Railey was 5-for-5 from the distance against VSU.

While VUU came into the Freedom Classic on a losing streak, VSU had won three straight games and seven out of eight under Coach Lonnie Blow.

The Trojans had moved up to No. 10 in the regional rankings.

Lual Daniel Rahama led the Trojans with 12 points. But points were hard to come by following halftime.

Unable to crack VUU’s signature “circle zone” defense, VSU shot 7-for-27 during the second half, including 1-for-12 from beyond the arc.

Coach Butler is trying to make the most of this monthlong, five-state bus tour. “It’ll get us ready for the tournament,” he said.

A team could play as many as five games in the CIAA Tournament Feb. 24 through 29 in Charlotte, N.C.

It helps that five of the Panthers’ last six regular season games will be at Barco-Stevens Hall on the VUU campus. That includes a VSU rematch on Feb. 22.

The Freedom Classic traditionally was played on a Sunday night at the Richmond Coliseum preceding the Dr. Martin Luther King Jr. Holiday. With the Coliseum closed, the Freedom Classic relocated to the VSU Multi-Purpose Center last year, also moving from Sunday to Saturday.

In January 2019, VSU defeated VUU 88-73 in the first Freedom Classic away from the Richmond Coliseum. VUU then won the rematch 75-67 at a jam-packed Barco-Stevens Hall.

It figures to be hopping again later next month, with a possible CIAA Northern Division title at stake. 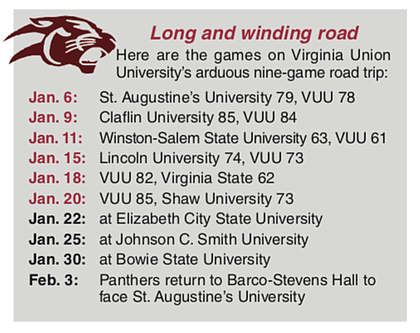