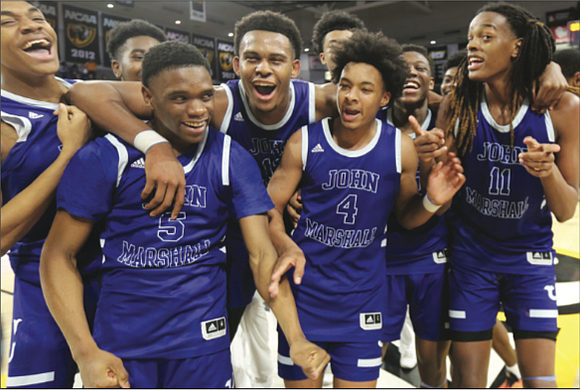 The John Marshall High School basketball team celebrates after defeating Gate City High School 75-57 to clinch the state 2A crown on March 12 at the Siegel Center in Richmond. Photo by Regina H. Boone 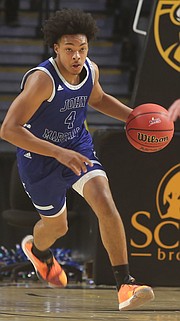 The Justices won the 2014 and 2018 state crowns in Division 3. This was first season the team has played in Division 2. The divisions are based on a school’s enrollment.

Wheeler figures to rank among the top big man prospects nationally in the Class of 2021. Already, he has taken recruiting trips to the University of Louisville, North Carolina State University and VCU.

Wheeler settled for 11 points, nine rebounds and three blocked shots against Gate City. His long-stemmed inside presence pretty much eliminated any inside scoring by the Gate City Blue Devils.

Nelson, a transfer from Varina High School, is a do-it-all combo guard who can score inside and out and knows how to distribute and break down a defense.

“Jason is a very smart player,” Coach White said. “He knows when to shoot and when to pass.”

So far, Nelson has visited the University of Richmond and Vanderbilt University.

One can’t help but notice Parker’s exceptional talent. The varsity newcomer appears comfortable at any position on the floor. His only fault, if you can call it that, is that sometimes he gets a bit carried away.

Parker drew one technical foul for hanging on to the rim following a dunk, and was dangerously close to a second for a similar violation.

Seward, the left-hander with the picture perfect 3-point release, hit three 3-pointers and had 17 points in his career ender. Lynch, an all-round talent with serious hops, had five points and four rebounds.

Undecided on his college choice, Seward has scholarship offers from Virginia Union and Virginia State universities.

All of the Justices’ success came this season despite losing five seniors off last year’s squad who earned college scholarships.

It seems there’s no end to John Marshall’s talent pool. Its junior varsity team this year was 18-4.

John Marshall’s relentless defensive pressure took its toll on Gate City, whose senior guard, Bradley Dean, had 32 points. But it took him 32 shots to get it, and he was charged with five turnovers.

Dean finished 13-for-32 from the field, 4-for-14 from behind the arc. Every move Dean made on the court was contested by one or more Justices.

“Our game plan was to make him work,” Coach White said.

The Justices barely tapped the breaks in rolling through the region and state play. The Justices’ six postseason wins came by an average 37-point differential.

Coach Vermillion did not say John Marshall was doing anything against the rules, only that Team Loaded was serving as a quasi-feeder system for the Justices.

“I’d like to see where those kids (from John Marshall) were born, grew up ... what feeder schools they came from,” Coach Vermillion said.

Coach White chose not to engage in that controversy.

“I didn’t like the narrative because it was taking away from the kids – on both sides – who played a great game,” Coach White said. “Those kids needed to be celebrated at that moment. Gate City has a super program.

“If Coach Vermillion wants to discuss the subject, I’d prefer he do so with me in a private conversation.”

John Marshall finishes with 19 straight vic- tories. The team’s only defeats were 70-69 on Dec. 27 to McEachern High School of Georgia, and 66-55 on Dec. 21 to Sierra Canyon School of California.

Traditionally, the state tournament should provide the toughest challenges for a team. In John Marshall’s case, the state is likely the softest part of the schedule.

John Marshall High versus Gate City High was the last game played during the state tournament. The Division 3 through 6 finals were canceled because of the coronavirus crisis, with co-champions declared in those classes.

“I guess the coronavirus came one day too late to save us,” Coach Vermillion said with a laugh.

It was an eerie sight exiting the Siegel Center in the late afternoon on March 12. Instead of all the excitement normally associated with state finals, workmen were cleaning up. Everyone was going home.

The old Willie Nelson song came to mind: “Turn out the lights/The party’s over.”

That is, until next season, when the Justices figure to kick up their heels again.

Here’s a list of state titles won by Richmond Pubic Schools’ boys’ basketball teams since the merger of the Virginia Interscholastic Association and the Virginia High School League in 1969: