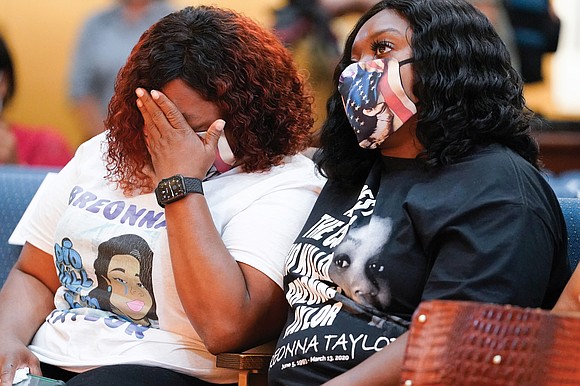 Tamika Palmer, the mother of Breonna Taylor, weeps during a news conference Tuesday announcing a $12 million civil settlement between the estate of Breonna Taylor and the City of Lousiville in Kentucky. Photo by Bryan Woolston/Reuters

LOUISVILLE, Ky. - Months after the police killing of Breonna Taylor thrust her name to the forefront of a national reckoning on race, the City of Louisville agreed to pay the Black woman’s family $12 million and reform police practices as part of a settlement announced Tuesday.

But Ms. Taylor’s mother and others who have taken up her cause said much more must be done to right the wrongs of racial injustice in America.

“Please continue to say her name,” Ms. Taylor’s mother, Tamika Palmer, declared at an emotional news conference on Tuesday, evoking the call that has become a national refrain for those outraged by the shooting and police violence.

Ms. Taylor’s death sparked months of protests in Louisville and calls nationwide for the officers to be criminally charged. The Kentucky attorney general, Daniel Cameron, is investigating police actions in the March 13 fatal shooting. 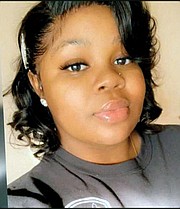 “I cannot begin to imagine Ms. Palmer’s pain, and I am deeply, deeply sorry for Breonna’s death,” said Louisville Mayor Greg Fischer in announcing the terms of the lawsuit settlement.

Standing nearby as the mayor spoke, Ms. Palmer said the police reforms were not enough.

“We must not lose focus on what the real job is, and with that being said, it’s time to move forward with the criminal charges, because she deserves that and much more,” Ms. Palmer said.

“As significant as today is, it’s only the beginning of getting full justice for Breonna.”

The lawsuit, filed by Ms. Palmer in April, accused police of using flawed information when they obtained a “no-knock” warrant to enter the 26-year-old woman’s apartment. Ms. Taylor and her boyfriend, Kenneth Walker, were roused from bed by police, and Mr. Walker said he fired once at the officers, thinking they were intruders. Investigators said police were returning fire when they shot Ms. Taylor several times. No drugs were found at her home.

Dissatisfaction with the settlement extended to “Injustice Square” in downtown Louisville, where demonstrators have gathered daily for 113 days, demanding justice for Ms. Taylor. Some who listened to the announcement over a loudspeaker near a memorial for Ms. Taylor said the price for a life seemed low, the promised reforms too little and too late.

“It’s just not enough,” said Holly McGlawn, who noted how much Ms. Taylor might have made had she lived. She was young, she could have worked for another 40 or 50 years, she said.

“You can’t put a price on a Black woman being able to sleep at night and know she’s not going to get murdered,” Ms. McGlawn said.

“Justice delayed is justice denied. There was a better way to handle this,” agreed Shameka Parrish-Wright, who has been part of the daily demonstrations where the city often faced peaceful protesters with force. “I’m hearing apologies now that should have happened early on.”

Ms. Palmer left the news conference with one of her attorneys, Benjamin Crump, and met with protesters at the nearby park. She surveyed the original art of her daughter, prayed and wiped away tears.

She had just two words to say: “Pressure applied,” a saying her daughter often used as an emergency medical tech.

Mr. Crump said the $12 million payout is the largest such settlement given out for a Black woman killed by police.

The settlement “sets a precedent for Black people,” he said.

In the time since Ms. Taylor’s shooting, her death — along with that of George Floyd at the hands of Minneapolis police and the killing of others — has become a rallying cry for protesters seeking a reckoning on racial justice and police reform. High-profile celebrities including Oprah Winfrey and LeBron James have called for the officers to be charged in Ms. Taylor’s death.

Ms. Palmer’s lawsuit accuses three Louisville police officers of blindly firing into Ms. Taylor’s apartment the night of the raid, striking Ms. Taylor several times. One of the officers, Jonathan Mattingly, went into the home after the door was broken down and was struck in the leg by the gunshot from Mr. Walker.

The warrant was one of five issued in a wide-ranging investigation of a drug trafficking suspect who was a former boyfriend of Ms. Taylor’s. That man, Jamarcus Glover, was arrested at a different location about 10 miles away from Ms. Taylor’s apartment on the same evening.

The settlement includes reforms on how warrants are handled by police, Mayor Fischer said.

Other reforms seek to build stronger community connections by establishing a housing credit program to encourage officers to live in certain low-income areas in the city. Officers also will be encouraged to perform two paid hours of volunteer work every two weeks in the communities where they serve. The city also will track police use of force incidents and citizen complaints.

The city already has taken some other reform measures, including passing a law named for Ms. Taylor that bans the use of the no-knock warrants. Police typically use them in drug cases over concern that evidence could be destroyed if they announce their arrival.

The department also fired Brett Hankison, one of the three officers who fired shots in Ms. Taylor’s apartment that night. Mr. Hankison is appealing the dismissal.

The largest settlement previously paid in a Louisville police misconduct case was $8.5 million in 2012, to a man who spent nine years in prison for a crime he did not commit, according to news reports.