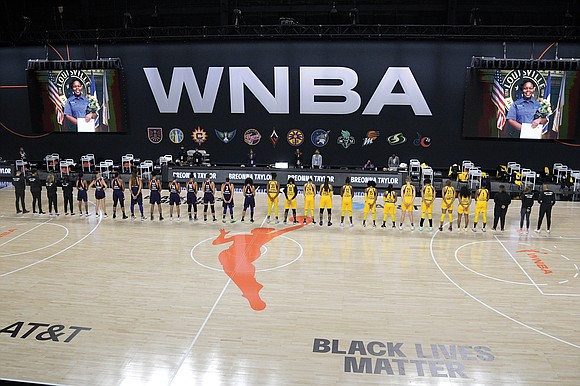 Members of the Phoenix Mercury, in blue, and the Los Angeles Sparks stand for a moment of silence in honor of Breonna Taylor before a WNBA basketball game last Saturday in Ellenton, Fla. Photo by Phelan M. Ebenhack/Associated Press

WNBA players opened their season last weekend wearing uniforms featuring Breonna Taylor’s name to honor the 26-year-old emergency medical technician and former high school basketball player who was shot and killed by plainclothes police who broke down the door of her Louisville, Ky., apartment on March 13 to serve a narcotics search warrant.

No drugs were found during the early morning search by officers executing a no-knock search warrant. Ms. Taylor’s family and protesters around the country have called for action against the officers who shot her.

The WNBA is considering ways to recognize other women who have died because of alleged police brutality or racial violence, including Sandra Bland in Texas in July 2015.

Players in the league have the option to wear the uniforms throughout the season. They also will wear warmup shirts that read “Black Lives Matter” on the front and “Say Her Name” on the back throughout the season, the league and players’ union announced in early July. Also, the phrase “Black Lives Matter” is featured prominently on the courts where the teams practice and play.

“We are incredibly proud of WNBA players who continue to lead with their inspiring voices and effective actions in the league’s dedicated fight against systemic racism and violence,” WNBA Commissioner Cathy Engelbert said. “Working together with the WNBPA and the teams, the league aims to highlight players’ social justice efforts throughout the 2020 season and beyond. Systemic change can’t happen overnight, but it is our shared responsibility to do everything we can to raise awareness and promote the justice we hope to see in society.”

The league and players association also announced the creation of a new platform — The Justice Movement — and the creation of the WNBA/WNBPA Social Justice Council. The purpose of the council is to push for change on issues including race, voting rights, LGBTQ advocacy and gun control.

“As many WNBA players — past and present — have said and, more importantly, consistently demonstrated, the reason why you see us engaging and leading the charge when it comes to social advocacy is because it is in our DNA,” WNBPA President Nneka Ogwumike said. “With 140-plus voices all together for the first time ever, we can be a powerful force connecting to our sisters across the country and in other parts of the world. And may we all recognize that the league’s stated commitment to us — in this season and beyond — offers a pivotal moment in sports history.”

The shortened WNBA season has been moved to a single location, the IMG Academy in Bradenton, Fla., because of the coronavirus pandemic.