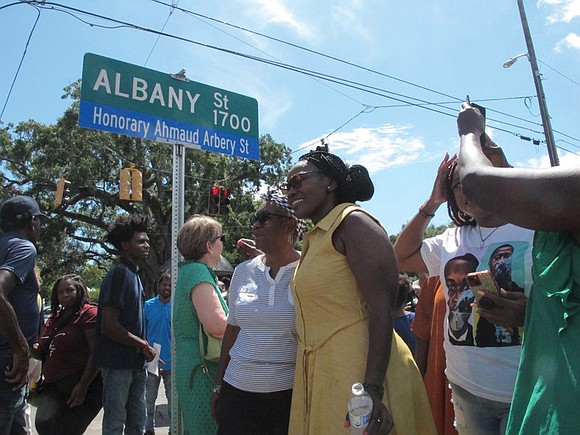 Wanda Cooper-Jones (in yellow dress) poses for photos with supporters beneath a new street sign honoring her son, Ahmaud Arbery, that was unveiled Aug. 9 in Brunswick, Ga. Photo by Russ Bynum/The Associated Press

Louisville activists put in long hours on phones and in the streets, working tirelessly to call for arrests in the fatal police shooting of Breonna Taylor — but it was mostly two years filled with frustration. They saw their fortunes suddenly change when the federal government filed civil rights charges on Aug. 4 against four Louisville police officers over the “drug raid” that led to the death of Ms. Taylor.

The shooting of Ms. Taylor, helped fuel the racial justice protests that rocked the nation in 2020. After a series of disappointing setbacks, the charges brought a welcome sense of relief.

“it is such a weight lifted,” said sadiqa Reynolds, president of Louisville’s urban League, who has advocated for Ms. Taylor’s family and led protest marches. “What this decision yesterday did is to begin lifting the cloud that had been hanging over us.”

The indictments represent the first time Louisville police officers have been held accountable for Taylor’s shooting death in her home. Most of the new charges center around the faulty warrant that led officers to Ms. Taylor’s front door.

The 26-year-old Ms. Taylor was shot to death after officers used a battering ram to knock down her door during a search for drugs. None were found. Ms. Taylor’s boyfriend fired a defensive shot that hit one of the officers as he came through the door. The boyfriend said he thought the officer was an intruder. Several police officers returned fire, striking Ms.Taylor multiple times.

The spring and summer of 2020 became a time of reckoning over how police treat Black communities. Protesters shouted Ms. Taylor’s name along with that of George Floyd, who died from suffocation three months after Ms. Taylor when a Minneapolis Police officer kneeled on his neck.

All were convicted of the charges in February of this year, and on Aug. 8, the father and son who chased and killed Mr. Arbery in a Georgia neighborhood each received a second life prison sentence— for committing federal hate crimes, months after getting their first for murder — at a hearing that brought a close to more than two years of criminal proceedings.

U.S. District Court Judge Lisa Godbey Wood handed down the sentences against Travis McMichael, 36, and his father, Greg McMichael, 66, reiterating the gravity of the February 2020 killing that shattered their Brunswick community. William “Roddie” Bryan, 52, who recorded cellphone video of the slaying, was sentenced to 35 years in prison.

“A young man is dead. Ahmaud Arbery will be forever 25. And what happened, a jury found, happened because he’s Black,” Judge Wood said.

The McMichaels were previously sentenced to life without parole in state court for Mr. Arbery’s murder and had asked the judge to divert them to a federal prison to serve their sentences, saying they were worried about their safety in the state prison system. Mr. Bryan had sought to serve his federal sentence first. Judge Wood declined all three requests.

Meanwhile, A crowd of dozens chanted on a sweltering street corner Tuesday as Ahmaud Arbery’s hometown unveiled new street signs honoring the young Black man who was fatally shot after being chased by the three white men in a nearby neighborhood — a crime local officials vowed to never forget.

Officials in coastal Brunswick, where Mr. Arbery grew up, have ordered that intersections along all 2.7 miles (4.35 kilometers) of Albany street that runs through the heart of the city’s Black community will have additional signs designating it as Honorary Ahmaud Arbery street.

The first two signs were unveiled Tuesday at an intersection near the Brunswick African-American Cultural Center, where one wall is adorned with a giant mural of Mr. Arbery’s smiling face.