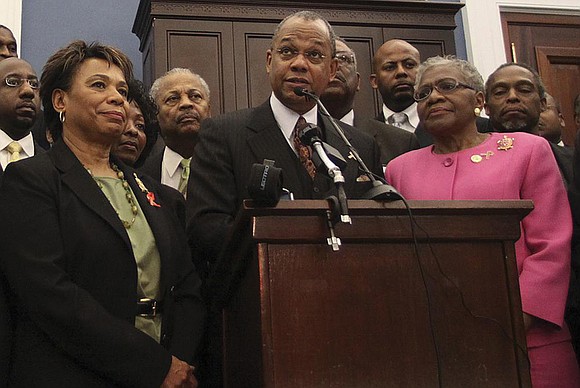 Rep. Barbara Lee, D-Calif., the Rev. Calvin Butts, and Rep. Alcee Hastings, D-Fla., are joined at podium by other church and community leaders from New York, in March 2010 on Capitol Hill. Rev. Butts welcomed generations of worshippers as well as politicial leaders from across the world at Harlem’s landmark Abyssinian Baptist Church. Associated Press file photo

“The Butts Family and entire Abyssinian Baptist Church membership solicit your prayers for us in our bereavement,” the church stated on its website. No cause of death was given.

Rev. Butts began serving as a youth minister at Abyssinian in 1972 and was senior pastor there for more than 30 years. He also served as president of the State University of New York at Old Westbury, on Long Island, from 1999 to 2020.

His post at Abyssinian gave Rev. Butts one of the most prominent pulpits in the U.S. The church traces its roots to 1808 when a group of Black worshippers who refused to accept segregation at the First Baptist Church of New York City left to form their own congregation. The church’s current home on 138th Street in Harlem is a massive Tudor and Gothic revival structure dedicated in 1923 and designated a city landmark in 1993.

Rev. Butts was known for working with political leaders across the ideological spectrum.

Rev. Butts surprised many by endorsing Hillary Clinton over Barack Obama in the 2008 Democratic presidential primary, saying the endorsement “was not and is not and will not become a race-based decision for me.” Rev. Butts later said he was “overjoyed” when President Obama was elected as the first Black president of the United States that November.

Rev. Butts’ impact extended far beyond his church’s walls. In 1989, he established the nonprofit Abyssinian Development Corp. to develop moderate-income housing, retail, schools and other projects in the surrounding neighborhood.

Rev. Butts helped mobilize church leaders to support programs for AIDS patients in the 1980s and more recently set up a COVID-19 vaccination clinic at Abyssinian to encourage community residents to get immunized against the virus.

“The kind of conspiracies we saw in the past were real but they do not exist about these vaccines,” Rev. Butts said last year in a reference to the racist history of episodes like the Tuskegee syphilis study that left many Black people mistrustful of medical authorities.

Rev. Butts courted controversy in the 1990s by preaching against violent and misogynist rap lyrics. He had parishioners bring recordings of the offensive music to church to be steamrolled in June 1993 but then ended up dumping the CDs in front of a Sony office in midtown Manhattan instead of smashing them.

“Rap is an extremely powerful art form,” Rev. Butts said at a debate with rapper Ice-T. “It comes from the creativity of African people. And anything that comes from our creativity is powerful, and it grabs. And therefore we want to make sure that as it grabs it also shapes in a constructive and redemptive way our young people to continue our progress against the evils that try to crush us.”

Tributes to Rev. Butts poured in following his death.

“He was a dominant faith and academic leader for decades,” the Rev. Al Sharpton said in a statement. “We knew each other for more than 40 years, and while we did not always agree we always came back together.”

New York Gov. Kathy Hochul called Rev. Butts “a force for moral clarity, a voice for his Harlem community, a counselor to so many of us in public service” and said she was proud to call him a friend.

The man Gov. Hochul succeeded last year, former Gov. Andrew Cuomo, called Rev. Butts “a man of substance and of values to whom the term ‘public service’ doesn’t begin to describe the impact he had on this city and this state.”

Rev. Butts was born in Bridgeport, Conn., and grew up in the New York City borough of Queens. He graduated from Morehouse College in Atlanta, then returned to the New York area and earned a master’s degree from Union Theological Seminary and a doctor of ministry degree from Drew University. He began his ministry at Abyssinian while in graduate school.

Like other churches, Abyssinian was forced to go online-only in the first months of the coronavirus pandemic and then gradually reopened.

The church hosted a private memorial service for the pioneering Black actor Cicely Tyson last year, with Bill and Hillary Clinton and Tyler Perry in attendance. Rev. Butts praised Ms. Tyson as an example of “an example of how we all might live.”