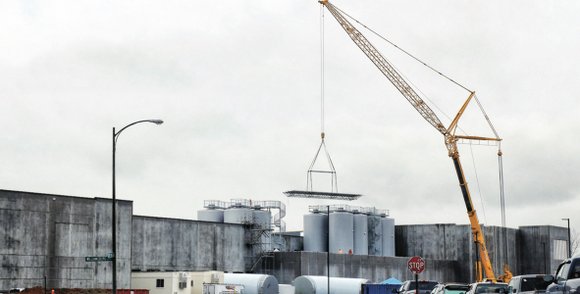 Black contractors have quietly played a big role in the development of the Stone Brewing Co.’s new East Coast brewery off Williamsburg Avenue in Fulton, according to city records.

Meanwhile, Richmond consulting engineer Janet Daniels and her staff were involved in the structural design as a subcontractor to Draper Aden Associates, OMBD stated.

And Van Williams of Charles City County-based Williams Window & Glass Inc. and his employees installed the glass and glazing in the building, according to OMBD.

Eight other black contractors were involved in installation of lighting and wiring and other aspects of the $25.3 million development that is near completion, the records show. The project initially was pegged to cost $23 million, but foundation problems added about $2.3 million to the cost, the Economic Development Authority has reported.

The mayor was not immediately available for comment, nor was Rich Johnson of the city’s EDA, which has been responsible for the project.

The high percentage spent with black- and minority-owned companies has been typical of most of the major projects Richmond has undertaken during Mayor Dwight C. Jones’ tenure, including the city’s new jail and four new schools.

The city’s report on the Stone Brewing project indicates that the EDA and Hourigan Construction Co., the project’s white-owned general contracting firm based in Virginia Beach, sought to largely meet the city’s goal of having up to 40 percent of the work undertaken by black- and minority-owned businesses.

Those levels of inclusion far exceed the inclusion of black-owned and minority contractors in the city’s general procurement for goods and services or in procurement by the state and other cities and counties in the Richmond region.

The city did not make a big fuss about its record of minority inclusion in most of the other recent large projects, nor has it spotlighted the inclusion level in the Stone Brewery project.

The Free Press received the report on the Stone Brewing project in response to a request for information from the city.

From the start of the Stone Brewing development in early 2015, most of the construction attention has focused on Hourigan, the general contracting firm that also has offices in Richmond.

The city put the EDA in charge of building and leasing the production center to Stone Brewing in order to recover the city’s investment over several decades. The EDA hired Hourigan to ramrod construction. Hourigan also handled the swift, 25-week construction of the Washington pro football team’s Richmond training camp for the EDA.

The EDA also reported a high level of inclusion in the training camp project that was built in 2013. During construction, eight black-owned companies collectively gained contracts worth $2.3 million, or about 29 percent of the $7.8 million spent on actual construction, the Free Press reported at the time, based on city figures.

In the brewery project, Hourigan also had major white-owned firms as subcontractors, including Chewning & Wilmer and Atlantic Constructors, for which the majority of black- and minority-owned businesses worked.