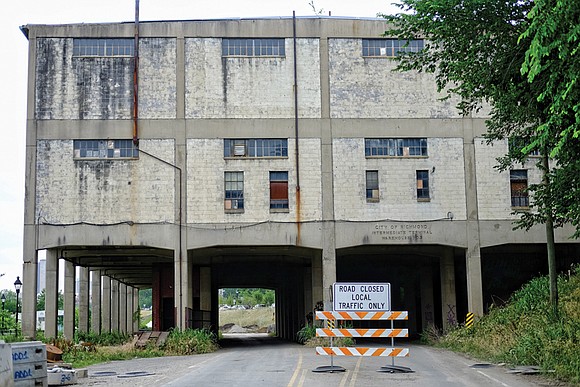 View of the warehouse in the East End that was once a centerpiece of Richmond's efforts to create a bustling commercial port at Intermediate Terminal on Water Street along the James River. Photo by Sandra Sellars Richmond Free Press

The fate of a landmark warehouse in the East End that was supposed to be transformed into Stone Brewing’s destination bistro and beer garden remains in limbo.

Three years after promising to renovate the Intermediate Terminal building with an $8 million loan offer from the city, Stone Brewing now wants to demolish and replace the building at 3101 E. Main St. with a modern structure.

But those plans have become more complicated.

Even as another party steps forward to try to buy the building, City Hall, which is backing Stone Brewing’s effort to demolish it, is now wrestling with a state agency over the building’s historical value and has been forced to suspend efforts to secure City Council approval to allow Stone Brewing to proceed with its plan.

The city is engaged in the review of the building’s value because federal funds have been used in that area.

The state Department of Historic Resources (DHR) is questioning the city’s efforts to prove the vacant 1937 building does not deserve a listing on the state and national registers of historic places.

Both sides agree the building, once a major employment center for black workers, was developed as part of an ambitious Richmond effort to revive itself as a major port of call for shippers.

The city argues that the building now stands alone, as all the rest of the structures associated with the Intermediate Terminal have been wiped out, and is no longer related to anything. DHR suggests the building has enough value to be recognized on its own or to be connected with the city’s remaining port area, Deepwater Terminal.

In another blow, DHR also has found the building to be made of reinforced concrete, rejecting the contrary claims from the city and Stone Brewing’s architects that the building is not sturdy enough.

Adding another complication, Jearald D. “Jerry” Cable, owner of the Tobacco Co., has sent the city a letter offering to purchase “the building at a fair market value.”

Mr. Cable wrote that he is stepping forward after “Stone Brewing, in effect, has said it will not live up to its legal commitment to renovate and save the historical Intermediate Terminal building.”

He stated that he would undertake a privately financed project to renovate the space, which would be far better than the subsidized deal the city has planned to undertake with Stone Brewing. Mr. Cable, along with other restaurant and brewery owners, see that deal as “subsidizing unfair competition” as the city does not offer them the same deal.

So far, the city has not responded to the unsolicited offer, but the proposal could bolster efforts by Councilman Parker C. Agelasto, 5th District, to get Mayor Levar M. Stoney’s administration to pull back and put the building on the market to see if the building could attract bids from others that might be more suitable for Richmond taxpayers.