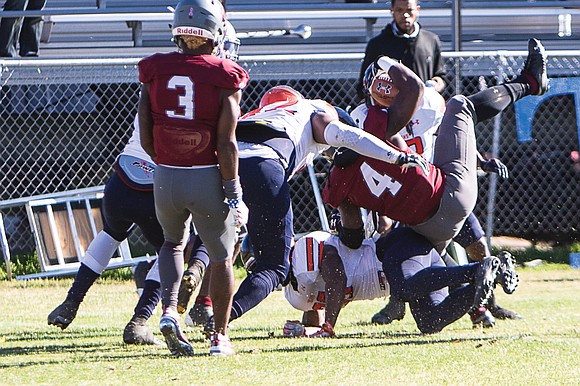 Virginia Union University’s Olu Izegwire, a senior wide receiver in the No. 4 jersey, gets pounded as he powers into the end zone during last Saturday’s game against the Virginia State University Trojans at Hovey Field in Richmond. Photo by James Haskins Richmond Free Press

The top seven teams qualify for the playoffs, with the No. 1 seed receiving a bye. VUU was No. 9 in the most recent poll released Monday, Nov. 5.

After shellacking Virginia State University 46-19 at Hovey Field last Saturday, the Panthers are all dressed up but the question is will they have somewhere to go.

Under Coach Alvin Parker, the Panthers still have one regular season game to go — against Johnson C. Smith University on Thursday, Nov. 8, in Charlotte, N.C. It’s a makeup of a game postponed in September because of Hurricane Florence.

The Panthers are 7-2 now and an overwhelming favorite to trounce the 2-7 Golden Bulls in Charlotte.

VUU’s offense, led by the “Taylor Terrors,” running back Tabyus Taylor and unrelated quarterback Darius Taylor, is on a season-long celebration of lighting up scoreboards.

The Panthers lead the CIAA in scoring (44 points per game), rushing (256 yards per game) and rushing touchdowns (29).

Sophomore Tabyus Taylor, with a locomotive style of flattening defenders, rambled for 180 yards and two touchdowns last Saturday against VSU and added another receiving touchdown.

For the season, the 250-pound Taylor of Hopewell High School’s Class of 2015 has 1,418 yards on the ground with 21 rushing touchdowns. He is averaging 6.4 yards per game and a best in program history of 157.6 yards per outing.

The versatile Tabyus Taylor, who played quarterback at Hopewell, also leads VUU in receiving with 34 grabs for 319 yards and two touchdowns.

VUU quarterback Darius Taylor is another statistical giant. The senior from Washington passed for 154 yards and three touchdowns against the Trojans and ran for another 75 yards.

Defensively, junior safety Sterling Hammond continues to draw oohs and ahhs. The reigning CIAA Defensive Player of the Year from Tappahannock had interception and fumble recovery against VSU and is like a tornado in the face of the opposition.

The Panthers also boast one of the top place kickers in all of HBCU football in Jefferson Souza. The Floridian added a school record 13th field goal (in 16 tries) against VSU and generally lands his kickoffs near the goal line.

Panthers to the playoffs?

Here are the latest rankings in the NCAA Division II poll for Super Region 2. The top seven teams advance to the playoffs starting Saturday, Nov. 17.

Despite these accolades, VUU remains on the outside looking in at the poll with only one set of games still to be played. If everything falls their way, the Panthers could be getting on a bus for a Nov. 17 NCAA game, likely in Georgia.

The weekly poll is conducted by the American Football Coaches Association in conjunction with the NCAA.

If the call comes — and that remains a big “if” — the Panthers seem more ready than ever.