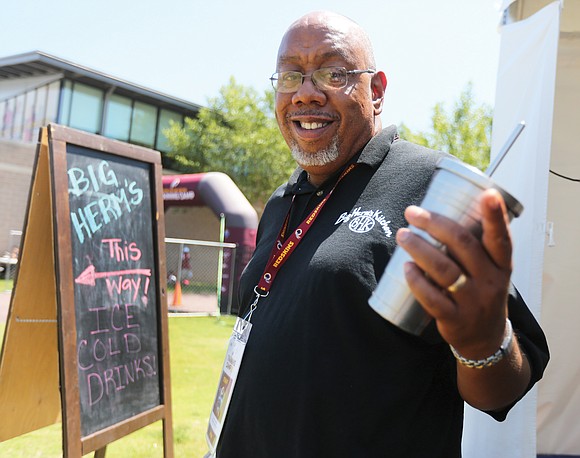 Herman Baskerville, owner of Big Herm’s Kitchen, shows the sign that points hungry and thirsty fans to his food concession at the Washington NFL team training camp in Richmond, where for the third consecutive year, he is the sole African-American vendor. Photo by Regina H. Boone Richmond Free Press

As football players gather in Richmond this month to test their stuff and compete for a role on the Washington NFL team before thousands of fans, some of Richmond’s small business enterprises are showcasing their best sides, too.

But once again, Herman Baskerville, owner of the popular Big Herm’s Kitchen in Downtown, is the lone African-American food vendor among the concessions inside the Bon Secours Training Camp.

The camp has operated for three weeks each year since 2013 at the taxpayer-supported facility on West Leigh Street behind the Science Museum of Virginia. No black-owned or locally owned businesses were granted space to sell inside the facility during the camp’s first year.

After the Free Press raised serious questions about the lack of local and minority vendor inclusion, Mr. Baskerville and Neverett Eggleston Jr., owner of Croaker’s Spot, were the two minority vendors selected to sell food at the camp during the second season in 2014.

However, for the third consecutive year, Big Herm’s is alone.

The Free Press asked Tony Wyllie, senior vice president for communications for the Washington football team, about the lack of growth in the number of African-American food vendors for the training season.

He said the team is always open to applicants, although he did not say whether no others had applied or whether any had been turned down.

“It’s very important to us to that we support local small business,” Mr. Wyllie said. “We’re very excited to see all of them return.”

Last year, he provided a list of minority vendors chosen to provide goods and services to support the training camp. Mr. Wyllie said at the time that 44 percent of the vendors and subcontractors in 2018 were small businesses based in the Richmond area, while 13 percent were minority owned.

They ranged from high profile small businesses like Big Herm’s to low-key, behind-the-scenes vendors involved in essential cleaning and laundry services for athletes.

Pat Foster, director of minority business development for the City of Richmond, said recruiting and selecting vendors for the training session is the responsibility and right of the football team.

“My job is to get as much business for minority vendors whenever I can,” Ms. Foster said.

She stressed the city has no role in vendor recruitment, screening or selection when it comes to the Washington professional football team’s use of the Bon Secours contract with the city for the athletic facility.

Floyd Miller II, president and chief executive officer of the Metropolitan Business League, said he did not know of the low volume of participation of African-American vendors in the preseason training camp.

He said neither he nor the non- profit that advocates for black- and minority-owned businesses has been contacted by football team officials or anyone from the city about the training camp.

“We have a plethora of vendors who could potentially provide services,” Mr. Miller said, noting the business league has more than 400 member vendors. “We want to be at the table” the next time people can apply to provide services for the team, he said. “We haven’t had any contact with those who select.”

Mr. Baskerville had no comment on the lack of minority vendors at this year’s camp other than himself.

Anne Fletcher, Big Herm’s assistant manager for the past seven years, said their crew spent several weeks readying for the added work of the three weeks of the camp. By opening day, Ms. Fletcher said, she and Mr. Baskerville wanted to make sure everyone was “on their toes.”

Big Herm’s was assigned a key location inside the practice field toward the front of the field gate. That helps Big Herm’s gain access to visitors and helps facilitate navigating the service area, including box seats for serving groups.

The key to making the short-term gig work is “communications,” Ms. Fletcher said, adding the restaurant already has a catering staff and it knows from the start “there’s more food coming and maybe longer hours” of work.

“You have to have good communications,” she said, echoing Mr. Baskerville.

The training camp, which is open to the public without charge, runs through Sunday, Aug. 11. Passes are required for entry and available online.