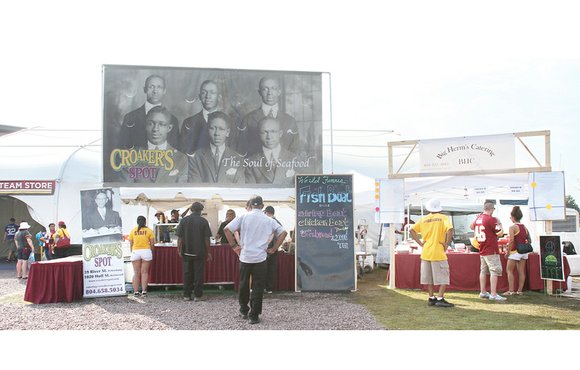 Sales were abysmal in 2014 for Croaker’s Spot, Big Herm’s Kitchen and other food vendors at the Washington NFL team’s training camp in Richmond. Photo by Sandra Sellars

The owners of Big Herm’s Kitchen and Croaker’s Spot — two popular local black-owned eateries — hope fans will bring a hardier appetite to the Washington professional football team’s training camp than they did to last year’s.

The camp is scheduled to open Thursday, July 30, and conclude Sunday, Aug. 16, at the Bon Secours-sponsored facility on West Leigh Street behind the Science Museum of Virginia.

Mr. Baskerville and Mr. Eggleston both reported lackluster sales to the Free Press during last year’s camp that attracted about 165,000 fans over 17 days. They complained that early-morning and late-afternoon camp hours hurt their businesses.

Practices began about 8:30 most mornings last year, as the D.C. team tried to avoid the scathing heat, and ended well before the lunch hour. The players did not return to training until after 4 p.m. and the workouts ended before the dinner hour.

At this year’s camp, the time between daily sessions has been sliced, with the D.C. team holding walk-through sessions at 10:45 a.m. and returning for practices at 3 p.m.

“I hope people will hang around between the two sessions, mingle and buy more food from us,” Mr. Baskerville said.

“Nobody made money last year,” he said Monday. “It was humdrum for everyone, no matter what” team officials said publicly.

Mr. Eggleston said near the end of last year’s camp, “I’ve been doing this for 64 years, and this was the worst I’ve seen.” He said he hopes to do better this year.

Last year was the first time Big Herm’s and Croaker’s Spot were able to sell food inside the camp after a campaign in 2013, led by the late Free Press Editor/Publisher Raymond H. Boone, documented the discriminatory training camp deal that preserved concessions for three national white-owned chains.

Two new vendors, Ronnie’s BBQ and Strawberry Street Café, will have trucks on West Leigh Street, according to Cindy Creasy, a spokesperson with SMG Richmond which runs the facility on behalf of the Richmond Economic Development Authority and oversees the vendors. Five other vendors will operate along the walkway leading to the entrance, she said.