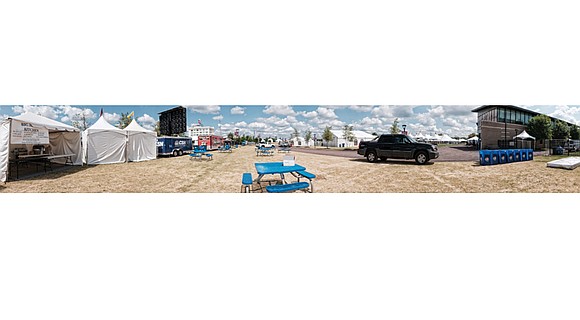 When Washington’s professional football team converges on Richmond this week for its annual three weeks of preseason practice, Herman Baskerville and his team from Big Herm’s Kitchen on North 2nd Street will be there to greet everyone.

Big Herm’s, one of the city’s popular fried fish and chicken spots, is the only local, minority-owned food vendor working this year inside the city-owned Bon Secours Training Center on Leigh Street. The eatery is among several minority-owned vendors — from cleaning services to food vendors — to share in the challenges and opportunities of working with the NFL team.

“It’s been hot days and long hours,” said Mr. Baskerville, owner of Big Herm’s, as he spoke earlier this week about readying for the big days ahead. Big Herm’s has a food station just inside the entrance of the two-field training center, adjacent to the media center.

“We have a good following,” Mr. Baskerville said. “The team has been very beneficial to me and our company.”

He said he hires two extra cooks and two people to work the front counter during football training season.

Big Herm’s is beginning its fourth year in partnership with the football team, the longest time any locally owned minority business has been “directly” involved with the team as a vendor. There have been others, like Croaker’s Spot restaurant, that have participated along the way and opted out for various reasons or not been invited to participate again.

Off the practice field, there are numerous examples of local minorities benefiting from the team’s presence, Mr. Wyllie asserted. The team likes Mama J’s Kitchen meals, uses the Jackson Ward restaurant and recommends it, he said.

Neverett A. Eggleston III, owner of Croaker’s Spot, which participated during the first season in 2014 among official, on-site local minority vendors, said he feels his restaurant still benefits from its presence as a food vendor.

“Exposure is an awesome thing,” he said, noting that he added many regular customers, including high profile football players, after being a vendor at the training center.

He decided to opt out of participating again, he said. “I just didn’t have the manpower for these long days.”

Absent enhanced efforts by the team, Bon Secours or the city, the presence of local minority vendors as partners with the Washington football team may have seen its high mark, Mr. Baskerville and others said.

Meanwhile, Big Herm’s is set to be among a half dozen local food vendors ready to represent Richmond in serving its best fried fish, barbecue chicken, hot dogs and hamburgers in competition with the national brands that have partnerships with the team, including Famous Dave’s, Papa John’s Pizza and Johnny Rockets.

“We’re back,” Mr. Baskerville said. “We’re starting up already,” he said, as he and his team put the final touches on their food station tent.