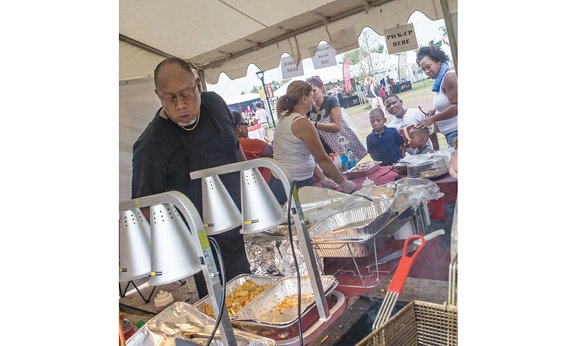 Herman Baskerville, owner of Big Herm’s Kitchen, oversees operations at his food tent last year at the Washington NFL training camp on West Leigh Street. Mr. Baskerville is one of the minority-owned vendors selected this year to return to the camp that opens July 28. James Haskens/Richmond Free Press

Herman Baskerville is optimistic about the start next Thursday of the 2016 summer training camp in Richmond for Washington’s professional football team.

For sure, hosting nearly three weeks of professional football

Mr. Baskerville, owner of Big Herm’s Kitchen, a take-out restaurant on North 2nd Street in Jackson Ward, hopes he and his employees will benefit

from that attention as one of the official vendors selected to sell food on the grounds of the training camp at 2401 W. Leigh St. No black-owned businesses or locally owned businesses were inside the training camp in 2013, the first year the team moved its training operations to Richmond from Pennsylvania. After the Free Press raised serious questions about the lack of local and minority-vendor inclusion, Mr. Baskerville and Neverett Eggleston Jr., owner of Croaker’s Spot, were the two minority vendors allowed to sell food at the camp during the team’s second summer training year in Richmond, 2014.

Mr. Baskerville, who has returned to the Bon Secours-sponsored training facility since then, hopes the third time is a charm for business success. The first year “was not good at all,” said Mr. Baskerville, echoing other vendors who experienced the same rough start in 2014. The second year “was better,” he said. This year, he hopes business at the training camp continues to improve.

“Trying to keep momentum going,” said Mr. Baskerville, noting nothing is guaranteed beyond the chance to be among those selling.

Indeed, including minority business owners among the vendors every year stands as a measure of the city’s sensitivity to ensuring a segments of its population and workforce are reflected in all its does. Training camp may be just a few weeks every year, all acknowledge. Still, the crowds expected for this year’s camp July 28 through Aug. 14 can provide vendors and their crews with employment, income and experience.

“We’ve made a concerted effort to include minority vendors,” said Tony Wyllie, senior vice president of the football team. “We’ve not neglected anyone.”

Neither the football team nor any city agency keeps an official tab on vendor inclusion year to year, making it impossible to measure with any specificity what the city, Bon Secours or the team have achieved over the years.

She noted that vendors chosen to operate inside the training center are the responsibility of the team, while those on the walkway leading to the facility are the responsibility of SMG, the Richmond firm that manages the property. Bon Secours, which leases the facility from the city, surrenders its control of vendor selection during the training camp.

Mr. Wyllie said two of the four major training camp vendors this year are minority owned. Big Herm’s Kitchen is one of the two, he said. An official list is to be announced this week or next week.

Lesa Williams of SMG said her company manages six spaces along the entryway into the camp and stadium grounds. Not all of those spaces are for commercial vendors, she said, noting the state Department of Motor Vehicles and the city’s tourism office have two.

Of the four remaining spaces, two of those vendors are minority-owned businesses, she said, the same number as last summer. She declined to name the businesses.

Vendors who operate inside the training camp grounds do not pay upfront fees to the football team or Bon Secours. Instead, they pay the team a negotiated percentage of their revenue from sales.

The public is admitted free to the camp — highlighted this year by 22 public games — although visitor registration is required.

Mr. Wyllie echoed Mr. Baskerville and others in voicing optimism for this year’s training season for a variety of reasons. The team is promoting the Richmond camp as a “family destination,” including a detailed connection to places to visit in Richmond and Washington. Its list of new “special events” includes a kids’ day, football fiesta and cheerleader camp.

The team also will introduce Kirk Cousins as its starting quarterback for 2016. Mr. Cousins, a member of the team for several years, replaces injury-ridden Robert Griffin III, known as “RGIII,” who has moved on to the Cleveland Browns.