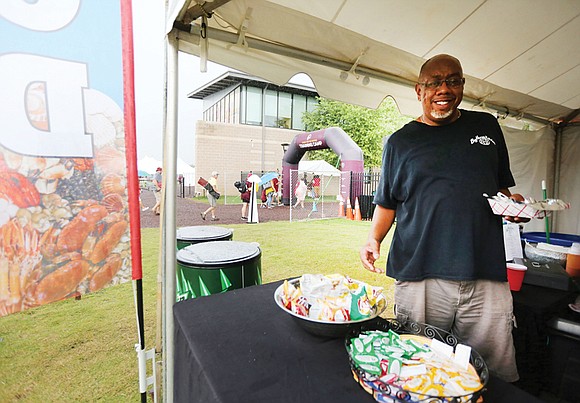 Winning a football game is not easy, not to mention a full season.

The Washington professional football team knows that firsthand, having seen championships slip from its grasp year after year.

Still, the team persists, with its summer training camp in Richmond getting underway.

Richmond businessman Herman Baskerville, owner of Big Herm’s Kitchen on 2nd Street in Jackson Ward, again is on hand, offering a tasty Richmond welcome to NFL fans as they gather for the Washington team’s training days at the Bon Secours facility on West Leigh Street.

Mr. Baskerville is among a small team of food vendors selling a variety of dishes inside the training facility. Again, as in the past two years at least, Big Herm’s is the only locally owned minority food vendor selected for the 19-day training camp, an event that generates priceless global visibility for its participants.

“We make money” working the summer training days, visibility aside, said Mr. Baskerville, as he helped his crew earlier this week to ready the variety of foods that are similar to the fare served daily at Big Herm’s Kitchen.

He said the vendor opportunity allows him to hire 16 extra people during training camp and, he believes, gets him added attention and business from outside the city year-round.

The additional staff, which includes a banker and a teacher among the crew, helps prepare and serve fried catfish, chicken wings, shrimp, onion rings and French fries, all served from his walkup vendor station just inside the Richmond facility’s entryway.

Unlike big national companies, Mr. Baskerville doesn’t have scientific studies to show how people from outside the Richmond area know of him. Based on anecdotal input, he suspects word-of-mouth advertising from someone who has visited or heard of Big Herm’s from past football camps explains why a tour bus full of people from Florida stopped at his restaurant this week en route to New York City. The only reason was to get food at Big Herm’s, he said proudly.

It’s that kind of anecdotal point that renews his feeling the tough work of being a vendor is worth it.

Mr. Baskerville and others who work such short-term events say being such a vendor does have its challenges, among them finding temporary staff and making sure the distraction is worth it. That helps explain why Mr. Baskerville is again this year the only minority food vendor of the six working inside the stadium.

The city-owned training facility, which Bon Secours uses year-round, offers local businesses extra income when the Washington team is in town during the summer. This year’s camp started July 26 and continues through Aug. 14.

“Each year, we review vendors and subcontractors needed to support our training camp,” said Tony Wyllie, senior vice president of the football team. “Wherever possible, we choose Richmond-based small businesses. This year, 44 percent of vendors and subcontractors are small businesses based out of the Richmond area and 13 percent are minority owned,” he said in a brief telephone interview this week.

In addition to Big Herm’s, Mr. Wyllie cited Elite Services, a woman-owned cleaning service, and Commonwealth Tent, a minority-owned tent supplier, as part of the team’s roster of vendors.

Without commenting on the stagnant rate of minority food vendor participation, Mr. Willey said the team was “looking forward to a great training camp in Richmond.”

At Richmond City Hall, the feeling about minority food vendor participation at this year’s camp appears to be overshadowed by a growing list of concerns building on the decision by the Richmond City Council earlier this year to take over the $8.5 million debt still owed on construction of the facility. City Council voted to pay $750,000 a year for 15 years to retire the debt.

“The absence of more local and minority vendors is just one of a number of concerns the mayor has with the existing agreement,’ said Jim Nolan, spokesman for Mayor Levar M. Stoney.

The city’s economic development agency and the football team are in the process of trying to work out a deal extending the football team’s contract to train in Richmond. The current deal expires in 2020.

Those big issues aside, Mr. Baskerville and his crew were hard at work this week on what they hope will be another successful year.